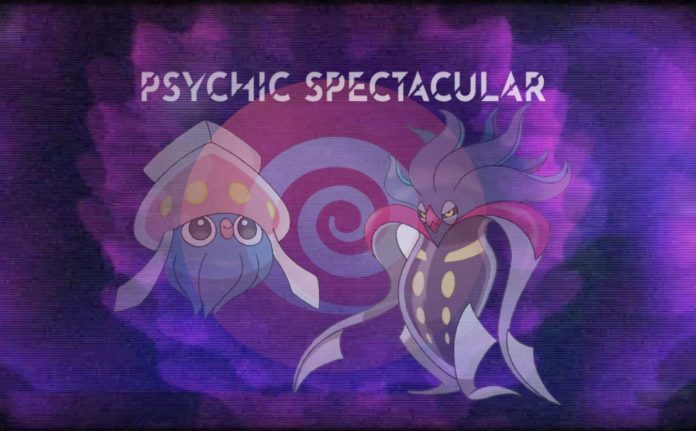 The next part of the Season of Mischief Special Research story has been officially announced. The Psychic Spectacular chapter within Misunderstood Mischief will provide us with a great number of benefits including frequent spawns of Psychic Pokémon, a new rotation of Raid Bosses, themed Field Research tasks and the debut of Inkay and Malamar!

We’re getting closer and closer to revealing Hoopa. In the meantime, we get to look forward to the Psychic Spectacular portion of the Season of Mischief Special Research story.

Now let’s get into the exciting part, shall we? Let’s find out what bonuses we will be granted with along with finding out how we can get our hands on Inkay and Its interesting evolution, Malamar.

Inkay and its Evolution, Malamar, will be making their Pokémon GO debuts! Inkay will evolve only under unique circumstances.

Trainers who have journeyed through the Kalos region in Pokémon X and Pokémon Y may have an inkling as to what those circumstances might be!

Inkay
Malamar
This is our first glimpse at the blue squid-like Pokémon, Inkay. From what we can see, Inkay will be a rare spawn in the wild. Inkay can also be obtained via one-star raid and also from themed Field Research tasks.

Inkay’s evolution, Malamar, is a dual Dark/Psychic type Pokémon with a max CP of 2667 (at level 50), 177 attack, 165 defense and 200 stamina. Many battlers that compete in GO Battle League and Silph Arena tournaments will be excited to acquire Malamar since the combination of Its dual typing paired with Its diverse moveset creates a powerful core breaker in many team compositions.

Fast Moves Charge Moves
Peck Psybeam
Psycho Cut Foul Play
Super Power
Hyper Beam
As we can see, Malamar’s moveset is diverse which provides it with the ability to be able to handle a lot of different matchups that a standard Dark or Psychic type would normally struggle with.

Psycho Cut is a Psychic type Fast Move that deals 5 damage and generates 8 energy. Pairing this with heavy-hitting moves such as Foul Play and Super Power (a Fighting type move on a Psychic type Pokémon!) creates an incredibly strong and spammy Pokémon which will surely wreak havoc among many.

A new chapter in Hoopa’s storyline opens up

Hoopa
The next part of the Season of Mischief Special Research story, Misunderstood Mischief, will unlock. Something’s got Psychic-type Pokémon all worked up, and they’re appearing more often in the wild! Sounds like the perfect opportunity to learn more about them. You never know—we might learn more about Hoopa as well!

Psychic Spectacular 2021 Raids
Psychic type Pokémon will be appearing in raids throughout the event.

* Alolan Raichu, Wobbuffet, Medicham, and Metang will be appearing in three-star raids.

Lugia will continue to appear in five-star raids.

* Lugia
Lugia is back as the head boss in five-star raids. Lugia’s raid CP is 45925 CP and has the following raid catch CPs:

* Slowbro (Mega)
Mega Slowbro is a Water and Psychic type Mega Raid Boss. Slowbro can be caught with the following CP values:

* 1382- 1454CP at level 20, no weather boost.
* 1728- 1817 CP at level 25 with Rainy or Windy weather boost.
* Slowbro (Mega)
* WaterPsychic
* MAX CP AT LVL 40 3755 | MAX CP AT LVL 50 4245
* ATK 224
* DEF 259
* HP 216
* WEAK TO STRONG AGAINST
Bug Dark Electric Ghost Grass Fire Ground Rock Fighting Poison
Depending on your levels and counters, we would recommend 3-6 high-level trainers who or more if you don’t have optimal teams. This is attributed to the fact that Mega Slowbro is quite bulky. For more information on Mega Slowbro and to find out which Pokémon perform the best at taking it down, be sure to check out our up-to-date Mega Slowbro Guide here.

By completing themed Field Research tasks, you can encounter event-themed Pokémon like Woobat, Inkay, and more.

Other Bonuses
Take a snapshot once a day for a surprise!

You’ll be able to get new stickers inspired by Psychic type Pokémon by spinning PokéStops, opening Gifts, and purchasing them from the in-game shop.